Is the world causing our children anxiety? 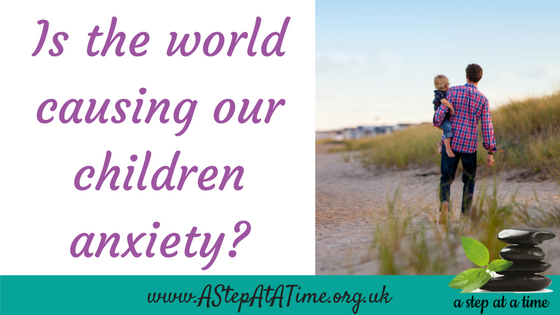 As the years go by my office is filled with more and more children and teenagers who are struggling with unwanted thoughts and feelings. Since I wrote the Adventures of Brian book collection this has only grown more considerably. Leading me to question – is the world causing our children anxiety?

19 years ago when I first entered the world of early years (working in a nursery) we would occasionally meet a child with separation anxiety or thumb sucking but these were few and far between. 15 years ago when I first went to work as a lecturer with 16-19 year olds you may have one teenager in your class with depression or anxiety but again it was much more a rarity than the world presented today.

In the early days of my career, or even in my own school days you just didn’t find a huge number of children struggling to the degree we see now. Life was – different. Tea parties at friends houses, playing out on our bikes and water fights in the streets with our super soakers was the paramount concern. Mobile phones were virtually unheard of and the internet was a figment of the imagination…. As I left my A-Level studies behind dial up internet was entering the scenes but were we prepared for the impact it would have?

In the 2017 Children’s Mental Health Report (presented by the Child Mind Institute) it has been guided that:
– the adolescent brain continues developing until at least the age of 25
– Most mental health disorders have onset before 24
– Teenagers and Young Adults (16-24) are the most intense users of social media
– Overuse of social media leads to a negative impact on self-esteem and life satisfaction

If you read my previous blog (ABC of Behaviour) then you will have seen that many behaviour are our brain’s attempt at keeping us safe and easing unsettled feelings. From the moment our brain develops we are collecting information. The beliefs of child psychologists and behaviourists such as Piaget look at the concept of schemas, in which children develop patterns of  behaviours, effectively our brain collates what we experience into boxes (schemas) that it relates all new learning to. When we look at the influences that children experience in the current times we can see significant evidence that their brains are overstimulated and often by information that is not suitable or at their comprehension (despite many parents working above and beyond to try and prevent this).

The simple facts are that our children are no longer just experiencing bike rides and super soaker fights in the street (many parents feel that they can no longer allow their children to play out alone like we did some 25 years ago) but now they have to contend with:

The reality – children can access information that we just couldn’t find…. and the result? More children than ever struggling with anxiety, depression, self-harm, future traumatic stress and negative thoughts…..

Whilst we cannot blame all of this on the developments of society – were we truly ready for them? 10 years ago as Facebook started to build momentum were we prepared for the research which shows that when the limbic system in the brain are at their most active (adolescence) that our teens are spending so much time on the computer? As the brain’s emotions develop rapidly we are overstimulating it with videos, articles and influences from social media which create accentuated feelings… the brain then being overloaded needs to respond.

Those who regularly follow my blogs about the brain will know that I have previously discussed the brain’s difficulty in processing anxiety ridden experiences (grief, trauma, stress) and therefore when children and teenagers are able to access imagery and videos of a traumatic nature how do they process it? The difficulty also being that often the impact of these is not seen until some weeks or months later and then the child or teenager will struggle to relate to what created the feeling in the first place…

This is by no means a blame to parents, the majority of parents I know and meet go out of their way to try to limit and prevent their children from accessing inappropriate materials but the difficulty is that other children do access them and share them.

So what can we do?

For details or an information pack about the treatments offered to children and teenagers please see my website: www.astepatatime.org.uk