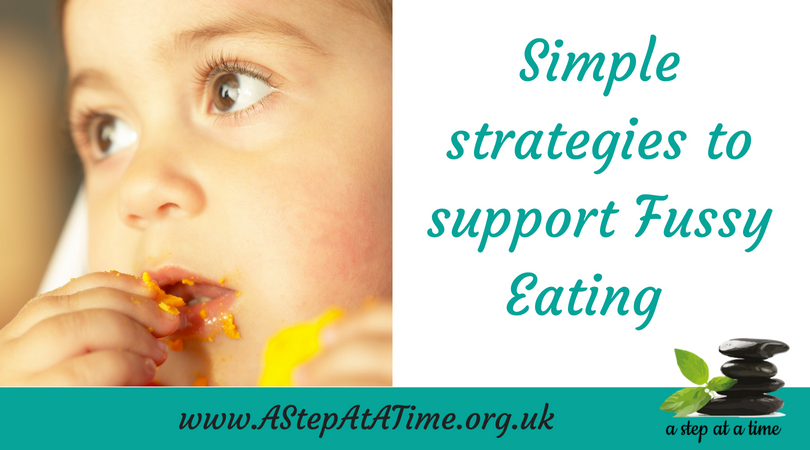 In June I was at the Connective Parenting Conference run by Sarah Fisher. Sarah works with a multitude of families using the NVR approach to support parents to connect with their children. If you haven’t heard about it just click on her name and it will take you over to her page. Whilst at the conference I was talking about managing stress (see my blog here) and also managing fussy eating at home. I promised that I would share some of the content so here’s a run through of fussy eating and some strategies you can implement today to start supporting your child to widen their food choices:

So where does fussy eating come from?

So, what’s the difference between a fussy eater and a food refuser?

Fussy eating is often a behavioural trait and is a common stage in child development. Most children will go through a phase of fussy eating around 2-3 years old and then come out the other side. Common traits of fussy eating can include:

Food refusal can be developmental (often peaks at 2yrs) or sensory based. In some cases it can be  phobia based (neophobia). Children who are food refusers will react different than fussy eaters. It can include;

Children with food refusal will often require a referral to a health visitor, paediatrician or nutritionist to support implementing appropriate strategies to diagnose the underlying cause (if it is developmental or sensory based) or support (if it is phobia based). In the case of fussy eating by first appreciating that we learn behaviours from both positive reinforcement and negative reinforcement. To change our children’s thought patterns to food we need to retrain them to feel differently, this means that we need to work in collaboration with children to introduce foods confidently and support this with appropriate responses.

A study of university students whose parents had insisted they ate a food as a child found that 72% of them now didn’t eat that food. It emerged that they perceived the parent as the “winner” and themselves as the “loser”. Now that they’d left home and it was up to them, they chose to “win” by not eating it.

Some simple strategies that can be used at mealtimes to support resolving fussy eating and opening up a wider food base include:

Overall be patient, our food tastes change all the time, one day something that we love is all we want, the next week we might have gone off it completely. The same applies to children. Trying the same food in differently prepared methods can change our reaction to it – but doing our best not to react is key.